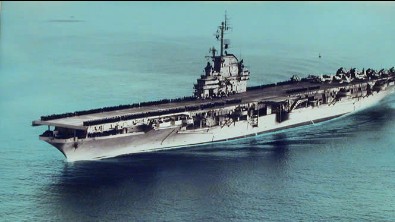 “On the Grey Ghost”

Today was a very exciting day for Diana who is a girl scout. She was going to sleep overnight on the aircraft carrier the U.S.S Hornet. She was going with other girl scouts on this trip, Diana could not wait to get on the ship. She loved doing these kinds of field trips especially` because she was going with her two best friends Alice and Avery. After a long trip the three friends had finally gotten there. Diana was so excited jumping up and down, “I can’t wait, come on you guys!” she said to Avery and Alice who were getting their bags.

Once they were done they entered the gangway, but to do that you had to cross a bridge because the ship was a few yards away from the dock. Avery who was terrified of heights had trouble going over the bridge,

“Um you guys I-I-I don’t think I’ll be able to do this” Avery said quivering. “Ahh come on don’t be a chicken Ave it’s not even that far” Alice said in a teasingly.

“Come on it’s not that hard just don’t look down.” Diana said trying to comfort her.

When they got inside they were amazed at how big the Hornet was, and it had steel floors and walls along with many airplanes inside of it. The three best friends were in shock.”Oooooooooooooooo” they all said in unison.

“Whow this is even more cooler than it looks like in the pamphlet.” Diana said looking at the pamphlet then back to the ship. All the girl scouts that were attending the trip would be able to sleep in the bunks of sailors that had worked on the ship, but nobody worked there anymore because the ship had retired. On their way up the stairs to their bunks Diana saw something move from the corner of her eye. She thought it was probably her imagination, but everyone that knows Diana, knows she’s a very curious girl. She started walking towards it.  She was in a dark room she didn’t know what room she was in, and all her focus was in the corner of the room where she reached out her hand. (Thinking it would be tall) She didn’t feel anything just a cold steel wall. When she was thinking she was being stupid and should head back she heard something it sounded like a “COOOU.”  She listened to were it was coming from, and it was on the floor in the same corner she was looking at. Diana looked closer to the floor once she saw it she knew what it was. It was a pigeon, and it wasn’t moving. Then she saw that its wing was broken by the way it was positioned. She didn’t want to touch it because she thought she might hurt it, so she saw one of the volunteers that would be helping the girl scouts with anything they needed.  She told one of the volunteers passing by, he was wearing a white long sleeved shirt, white pants, leather black shoes, a tie that was not tied more like in a knot and hanging .”Excuse me there’s a pigeon with-”.The helper didn't even stop he just walked right past her and through the wall.

“Diana! Diana!” it was Avery and Alice they saw Diana “Come on we were worried you had gotten lost" Alice said in worried voice.

“What who?” Avery asked Diana.

“Umm nevermind let’s go.” Diana said not wanting to tell them because she was really confused right now.

She started for the bunks, but then Avery pulled her back saying,”Hey where you going we're gonna eat dinner in the mess hall,  The people here are gonna make us spaghetti and caesar salad! Avery and Alice said excitingly. Two volunteers led them to the mess hall, only two in the front. They were wearing a blue puffy jacket and a orange undershirt.

Diana was curious why they weren’t wearing what the other volunteer was wearing. She went to the back of the line and asked a volunteer, “Excuse me may I ask a question.” she said politely.

“Why yes little ma’am.” he said with a country kind of accent.

“But why don't all of you volunteers wear the same uniform wearing?” she said curiously.

“Why I don’t know what you’re talking about, why everyone I know that works here wears this unless they’re visitors.” he said moving his hands up and down looking a bit like a monkey.

”Hey what are you doing all the way back there” it was Alice and Avery they both looked at her weirdly.

“I was just asking-.” she pointed to the right of her but there was no one.

Diana ate wondering where the man had gone but then thought he might have seen something wrong and just left, once she thought about the her hypothesis it kind of drifted away. After all the girl scouts had eaten they headed back to their bunks, Diana who was too occupied at the time didn’t get to see the bunks. Where she Alice, and Avery were sleeping was in the corner of a gigantic room filled with bunks and instead of there being one bed on top of the other there was 1-2-3 beds stacked up. Alice, Avery and Diana all went on the same bunk Alice on the top, Avery in the middle, and Diana on the bottom.

The next day they got ready and went to the mess hall for breakfast, on the way there Diana went to back of the crowd to ask the man another question, “Hello umm I asked you a question yesterday do you remember?” she said hoping he would remember.

“Oh yes-yes I remember, about what I’m wearing.” he said scratching his head.

“Well first if you don’t mind can I ask where you went when I was finished?” she said.

“Oh yes umm I had to go do something.” he said trying to find his words. “Well um I was walking to the bunks yesterday and I saw something move I thought it was a person but it was a pigeon with a hurt wing so I tried to tell one of the volunteers but he walked right past me and um through the…. wall.”  she said looking to the ground.

“Well he was wearing all white and I see you’re wearing orange and blue, so I’m just asking did I see a…….ghost.” she said unbelievably.

“Yes yes I think you did see a ghost but well you could think of him as scary and gonna be in your nightmares but you could also think of him as a hero. He’s probably why you’re standing here, he most likely served on the Hornet, and he died serving our country so maybe next time you see him be proud.” the whole time Diana was looking at the ground but when she looked up he wasn’t there she looked around and saw no one.

“Hey what are you doing? Come on we need to eat.” it was Avery. Diana ate breakfast thinking about what he said, and mostly where he went.

It was their last day there and Diana was the last one to get out of the room, again she saw the same sailor and said,”Thank you for your service.” she felt good and not afraid. On her way across the bridge she saw the man that had answered her questions he was just standing there at the bottom of the bridge, “thanks for that answering all my questions it really helped.” she said with a wide smile.

“ Anytime, anytime.” he responded with a smile too. “Who are you talking to?” asked Alice looking where Diana was and there was no one there. “Ohh no one.” When Diana left she knew that this was the best trip she had ever been on.

Welcome to the SchoolBlocks
self-guided tour!

The most common question we receive is, how is SchoolBlocks inspired by Pinterest? SchoolBlocks eliminates navigation bars and uses a block style layout that’s similar to Pinterest. It creates a unique and engaging browsing experience, optimizes for mobile and removes a lot of navigational complexity.

Please click on the red plus signs found on this page to learn more about specific features.